Today I heard the first Lucy’s Warbler of the spring, then spotted it, beady black eye, brown cap which raises up in a crest when it sings its simple repeated upnote, clothed in grey.

The plant is in the jointfir family, also known as Mormon tea, popotilla, teposote, and canatilla. According to the Epple field guide, Mormon settlers made a tea out of it, and Native Americans used it as a medicine. It is a shurb with long, jointed stems, the leaves are just scales. 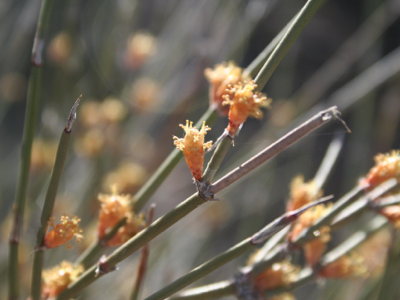