Arrived here to this beautiful view in this luxury hotel after a 24 hour trip via New York and Brussels. I ran into Karen King in Brussels, and we negotiated the curious brittle courtesy of the airline lounges to spend a quite couple of hours in the British Airways lounge. We were picked up at the airport by Marcel, a friend of Momar, who cheerfully informed us that the hotel was having administrative difficulties with official limo service. Momar is acting as translator between the Americans and Africans for tomorrow’s events. I had Pringles and a beer (Flag) from the minibar, then a shower. 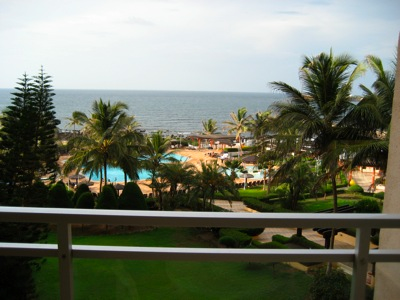