On the second day of the QEM workshop we met with students participating in the Pan African Mathematics Olympiad and their teachers. Four of them told us about their experiences, why they went into mathematics, and whether they were planning mathematics careers. One of them was the student on the right in this photograph, whose soft-spoken French I had trouble following, but who talk about the challenge and difficulty of mathematics, and the importance of his parents in encouraging him. He said he probably would be a mathematics teacher himself because they don’t seem to make much money, but that he would definitely encourage his younger brother to become one. There was also a student of Iranian parents in Zimbabwe who was steeped in a culture of intellectual superiority, and kept saying things like “When you are better than everybody else, you become a sort of icon.” But his response to the career question was that he would like to keep mathematics as a hobby, because he had observed that adults didn’t seem to enjoy their jobs, and he would like to continue enjoying mathematics. The other students were an English speaking boy from Botswana (?), and a French speaking girl. All spoke of their parents and of a teacher who had encouraged them.

The QEM workshop has been an interesting clash of cultures. Shirley McBay, and African-American woman and the mastermind behidn this, seems blissfully unaware that her insensitivity to francophone academic culture or to African norms of hospitality vastly overshadows any diaspora affinities there may be. She pushes a strict timetable almost to the point of rudeness, and ran a reporting-in session at the end of the first day that I think most African delegates found incomprehensible. Nouzha El Yacoubi from Morocco, secretary of the African Mathematical Union, started her summary by saying that there really hadn’t been enough time to develop a proper summary, upon which Shirley interrupted that she just wanted first impressions. I just don’t think the French academic culture deals in first impressions. 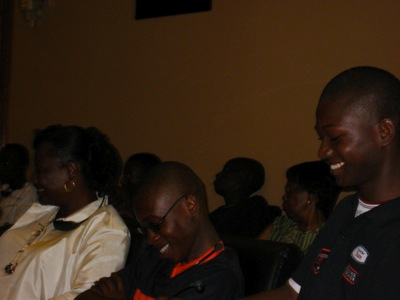