Terry and Penelope came round for the book club meeting, bringing Stephen with them. Since all our kids were there too it was a pleasant rowdy dinner around the kitchen table. Amy and I had gone down to the 17th Street Market to buy shrimp and had a companionable time wandering the aisles, picking out chilis and chutneys. For some reason it reminded me of trips to Quincy market when we were in graduate school, a strangely distant resonance since there are much more recent ones available, such as trips to Monterey Market in Berkeley. Perhaps it was the sense of an excursion from domestic routine. I picked up some smelt as well, which I tried to cook by dumping them all in hot oil. They disintegrated but tasted good. Must be a trick to producing the delicious fresh salty crusty things I was dreaming of. The book was An Unfinished Life, which we disposed of fairly quickly. We all liked it, but it was light fare. Stephen had been to some national fencing championships and came in second in one of the events. 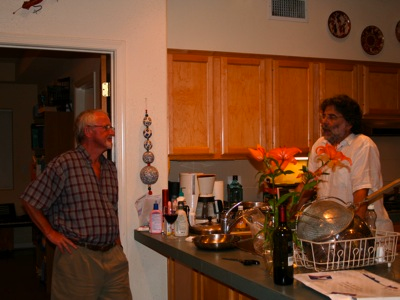