The crew from Firehouse Pictures and Vern Lamplot came by to interview me for distinguished professor video they are making. They asked me the usual question: when did I know I wanted to become a mathematician? And I gave the usual answer: not until university. Although I had been good at mathematics in high school I hadn’t been terribly interested in it (and didn’t see it as particularly connected with the enjoyment I got out of doing logic puzzles at home). It wasn’t until university that I discovered mathematics was about ideas, when I took calculus from Jack Gray and linear algebra from Alf van der Poorten. At the end the photographer asked if I had any photos I wanted to send and I thought of this one. I’m not sure I will, but it’s worth mentioning here: it’s the four original professors who founded the University of Queensland, with three of their wives. My mathematician grandfather Henry James Priestley is second from the right and my grandmother Margery Hewitt is on the left.

I do remember a couple of early indications that I might become a mathematician. I remember a conversation with mum as a child about adding odd and even numbers, where she helped me figure out the rules for what you get when you add two odds, two evens, and an odd and an even. I don’t think this had anything to do with school, I just wanted to know.

And in first year of high school, Freddy Kaineder (sp?), the only good math teacher I ever had in high school, predicted I would become a mathematician. He used to tell us he had written a thesis “this thick”, holding up fat finger and thumb, about transcendental numbers. He also used to tell us about the parties he had been at on the weekend where his friends had dared him to pull his pants down and show his bum. He was a contemporary in graduate school of Alf van der Poorten. 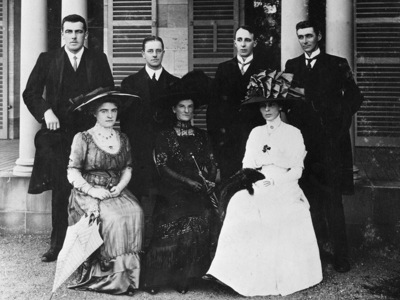