As Dan said, it was a proof by induction. At around midday I realized that I had not yet written my little speech, so did that instead of getting my class prepared. Firehouse’s short movies were fun: Mark Nichter’s had a lot of photos of him half-dressed in Southeast Asia. Dan compared my career to a professional juggling act on TV.

The dinner afterwards with the Regents was dominated rather by Vicki Chandler talking about Bio5, leaving the impression that we were accidental invitees to somebody else’s party.

Sally told us the story she couldn’t bring herself to tell us over the phone from New York. Apparently on the bus trip into the parade site she allowed her clarinet to fall beak down, breaking the expensive mouthpiece we had purchased for her. She asked everybody on the bus if they had a spare, nobody did, but one of the girls on the other buses saved the day.

What’s interesting about this story is her account of how she at first plunged into despair and hysteria at the thought that all her hard practice would be for nought, and that she would be marching in the parade pretending, and how she mastered these feelings (before finding the replacement) because she realized it was important to enjoy and value the experience and not let it be ruined by this tragedy. A true McCallum, that girl.

It was also touching to hear her excitement and appreciation of the Metropolitan Museum, particularly her thrill at discovering the Sargent we have have a print of over our bed. She dragged her companion back to see this at the last minute. The voyage was really like a mini-Odyssey for her, through the social perils and intellectual thrills of adolescence. Like all our children, she continues to amaze and delight us.

Cactus was on the menu this crisp morning—there was also a fallen prickly pear with a big, javelina-sized bite taken out of it. This finch has a bit of green in his mouth, so I think he is feeding on the flesh of the fruit, not the seeds (although, what do I know, maybe the seeds look like that, I should take a closer look next time).

The seeds from the Desert Brooms have all gotten caught up in the leaves of the Desert Ragweeds, so they look tangled up in white stars. And this barrel is covered with gourds again, about 9 of them this time.

Sally is in New York, Nell is in Paris, Rob and Nat are in New Jersey—so we were reduced to the kitchen table and the sideboard for Thanksgiving. But in many ways it was lovely: no guests to entertain for the rest of the weekend, low pressure preparation, and a chance to enjoy the meal and the guests. Normally I enter a buzz zone after we have sat down, and come out half an hour later wondering what the food tasted like. This time it was really delicious: I took the turkey off soon enough (2 hours on the Weber for a brined 14lb turkey), Vanda did delicious baby vegetables from A.J.’s, very garlicky mashed potatoes, and the usual lemon celery stuffing.

Speaking of which, Amy had sent the recipe for that to Nell so that she could cook it for her Irish, German, American-Iranian, and American-Indian Thanksgiving, and left off the lemons from the ingredients list. At 10am I got a text message from Nell, shouldn’t there be lemons? I texted the details back for her.

It rained on Sally’s Macy’s parade, but their one-minute performance was smart and crisp. She called us later, utterly exhausted from cold and lack of sleep, but happy.

Lots of hawks around recently. At first I thought this was the same as the tentative Grey Hawk [update 12/3: probably a Northern Harrier] from a week ago, since he flew off to the same eucalyptus on the east side, and was about the same size. But the markings are quite different. Another view of him shows the V-pattern spots on his wings, so I would guess this is a red-tail.

It’s been a busy few weeks. After the IME meeting I went to two meetings in Washington, one for MAA on Algebra, one for NCTM to decide whether it should write Curriculum Focal Points for grades 9-12. The first was incredibly badly organized, the second a lot of fun. But still, all this travel takes its toll. And Amy was in Boston for 10 days for the MESA meeting. Anyway, she comes home tonight, and we are heading into Thanksgiving. Sally left for New York this morning on the Macy’s trip. I took her a last minute care package of a bagged dinner, Amy’s down vest, and the cover for Amy’s iPod nano.

More and more, as I get older, I value that one day of the year when you can completely ignore work, and spend the whole day preparing a meal. 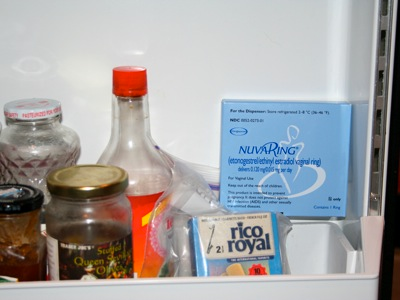 Sitting in the morning sun on a big eucalyptus on the east side of the wash. Distinguished from the Peregrine Falcon by the dark head, white behind the eyes, and the fact that the wingtips do not meet the end of the tail (according to Sibley). In the same tree was a hawk with a dark brown cap, white cheeks with dark eye-stripe, mottled wings, white belly, mottled breast. This fits the description of a juvenile Gray Hawk (as does the description of the hawk I saw a few days ago, which was in the same tree). I took some photos, and one shows in addition to the eye stripe a lower stripe along the chin, which also agrees with the description in Sibley. 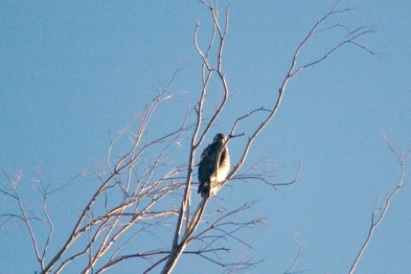 The wash is adrift with desert broom seeds born on tassel sails. Also saw a hawk this morning, dark back, front streaked at top, mottled from chest on down, square tail.