Sultan Qaboos University, Muscat, Oman. The University is laid out in grid, with covered walkways and tree-filled squares in between. I walked out in the afternoon and saw this guy fly in with a bug in beak. He makes a rapid high metallic repeated call. Also a Yellow-vented Bulbul (black head, slight crest, white eye ring, yellow rump, curved bill, black tail, light body, makes a wheezy da-de-da, about the size of cactus wren); lots of Common Mynah (noisy gangs of birds with black heads, yellow eye patches, curved beaks, white wing stripes underneath.

Spent all Thursday in Miami, all Thursday night and Friday travelling (via Paris and Bahrein). Opening ceremonies on Saturday morning, had a delicious smokey nut chocolate glop when sitting in a formal square of red chairs with the Vice Chancellor and luminaries. My quote from the Koran, provided by Adel Gamal, was well received: “Do not envy anyone except in two cases: A person whom God has given him wealth and he spends it righteously, and a person whom God has given him Wisdom and he acts according to it and teach it to others”. Vice-chancellor suggested we should have a memorandum of understanding. 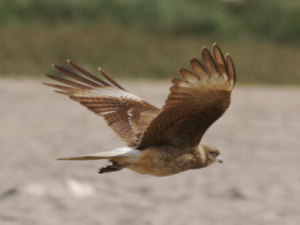 Concepcion, Chile. He was hanging around on the beach with the gulls. Also saw some possible scoters in the water: a line of four bobbing along, dark heads and bodies, red eyes, white necks with a dark stripe down the back.

Flew in on the Sunday, met the other speakers Jose-Antonio Chamizo (chemistry educator from University of Mexico in Mexico city, advisor of Vincent Talenquer) and Carl Wenning (physics educator from Illinois State). Dinner Sunday night with Patricio Pfelmer and the head of the Chilean Academy of Sciences at a rather deserted restaurant which however had good fish, particularly the abalone-like shellfish called Locos and a good Corvina (which I think is Chilean Sea-Bass). Gave my talk on Monday morning. Very long day of talks, especially for the poor students. Had a very lively session on the Tuesday morning with the education students (I did the exercise about solving quadratic equations with them). Tuesday afternoon went to a local fishing village … long drive, short stay … with Patricio’s colleague Leora(?). Saw a sea-eagle or hawk and some floating coot-like birds. Dinner Monday night at the Concepcion Club, and old masonic lodge. Wandering round the rooms and trying to say “we are lost” in Spanish, I discovered from Jose-Antonio that perdito means fart (lost is perdido). 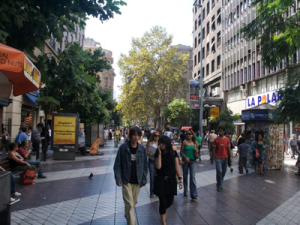 All night flight, surprising how refreshed you can feel when there is no jet lag to contend with. Slept a bit in the morning, had a nice lunch at the hotel, a sort of salmon ceviche and a fish called reineta, like a large, tough sole. Then to the wonderful Precolumbian Art Museum. There was a collection of clay funeral figurines from the Moche culture (0-200AD) which were quite beautiful and haunting. They reminded me of those paintings of the late Roman period that you see with people gazing into some mysterious inner space. Some were people, some were animals, and one was a Maurice Sendak Wild Thing.

Another spectacular piece was a tapestry of a similar age, also for funeral purposes, which showed fantastic creatures with alligator heads, two arms on one side and two fins on the other, and feet sticking out of fish tail ends, in gorgeous colors, swimming up and down the cloth. The label said it was about 2,000 years old, which would be hard to believe, except that it is very dry here so things last a long time. There is a desert in the north which has never had any recorded rainfall.

Suddenly the mesquites are putting out these green shoots. They were all quite bare from the frost. Saw a Cooper’s Hawk in the eucalyptus, and a probable Redtailed-Hawk in a tree in the wash. It must have been in transitional plumage; scalloped back, white through with red strip up the middle. In flight, notched tail, white patches on back of wing.

Suddenly everybody is up on wires, poles, and trees, singing away. The Pyrrhuloxias are at it too, in beautiful plumage with their elegant gray coats and red masks. The quail are up in the trees too, unusually, seeing if they can get in on the action. A quail perched on a branch has a slightly clueless, pompous air, as if he doesn’t now that topknots are decades out of style.

He was sitting on a telephone pole on the way back. Nice details on the plumage. 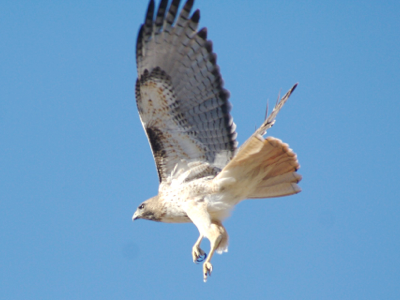 Interesting to see the diagonal slant of the eyeslit. Doves glide the way schoolchildren pretend to be airplanes; wing stiffly out, banking too and fro. The doves on the phone line were engaging in some unusual jockeying for position—spring?

Also saw a beautiful display of the Anna’s hummingbird, rising up from his perch on an acacia and turning about to show the iridescence.

Spring is creeping in … a lone desert marigold blooming at the base of the path down, and green creeping out from under the mass of dead sticks that form the clumps of canyon ragweed. Temperatures still crisp, but that won’t last long.