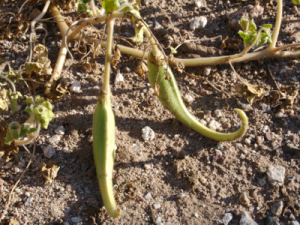 This is what happens to those yellow flowers I photographed 3 weeks ago.

The weather has been hot and muggy, but I managed to get out early this morning and see the sun catching these gorgeous cactus flowers.

Within a few days of returning to Tucson, I was on the road again, first to the Summer School on Iwasawa Theory at McMaster University in Hamilton, organized by Romyar Sharifi, me, and Manfred Kolster, and then on to the group working on high school Curriculum Focal Points for NCTM in Washington. This photo was taken on the free afternoon field trip to Niagara Falls. The Canadian side of Niagara Falls, where we were, was irredeemably commercialized and packed with tourists, but the falls were mesmerizing nonetheless. I stood for a long time watching the flow just behind me in this picture, trying to estimate the rate (about a few thousand cubic meters per second according to my rough calculation).

The Summer School was pleasantly grueling. I wish I had more opportunities to think about mathematics research. Robert Pollack’s talks on the Iwasawa theory of elliptic curves were great, and I felt I began to become familiar with the nonabelian theory from Coates’ talks.

The NCTM meeting was interesting, perhaps too long winded for my taste and temperament these days. Roger Howe was there as well, and we both had to push occasionally to keep mathematics content at the forefront of the document (surprisingly, since it was the push for content that stimulated all this). I am trying to get algebra described as a subject with meaning, and to put in some of the examples we have been thinking about in the consortium. Roger is concerned about estimation and place value. Eric Robinson, a mathematician from Ithaca College in New York state, was also there. He is a calculus reformer from way back. He has just taken part in an effort of Sol Garfunkel called Math is More.

The wash shows the recent flooding. The road is almost washed out. These were in the usual spot up the north end of my walk. Also saw a beatiful kestrel who flew off to the west side.